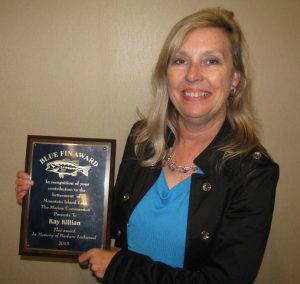 The Mountain Island Lake Marine Commission presented its 2013 Blue Fin Award to CLC Landowner Kay Killian for preserving more than 500 acres in Gaston and Lincoln counties near the lake to help preserve the quality of the Charlotte region’s drinking water.

Marine Commission Chairman Kari Lanning of Lincoln County praised Killian’s stewardship of the lake after the award was presented to her at the commission’s monthly meeting on Oct. 2 in Mount Holly.

The Marine Commission includes members appointed from Gaston, Lincoln and Mecklenburg counties. Meetings rotate between the counties. “The Killian family has lived in the Mountain Island area for generations and own land that would be prized for development,” Lanning said. “Instead, Kay Killian and her family have put their land into conservancy, preserving it as rural and protecting the water quality of Mountain Island Lake.”

The Marine Commission presents the Blue Fin Award every year to recognize people or organizations that have done positive things on or around Mountain Island Lake that benefit the lake, its residents and visitors.

“Kay Killian’s protection of so much land supports the Marine Commission’s mission to preserve and protect water quality, property and wildlife, and to promote public safety on Mountain Island Lake,” Lanning said. Killian, an assistant district attorney in Lincoln County, grew up on the family’s farm.

The land her family has conserved with Catawba Lands Conservancy (CLC) borders Johnson Creek, the largest western tributary of Mountain Island Lake. Approximately 562 acres of land owned by the Killian family in Gaston and Lincoln Counties are currently permanently preserved with CLC. Overall, nearly half of the lake’s shoreline is protected through land put into conservation easements as well as land purchased by county and state governments to protect the drinking water source for nearly one million area residents.

The Mountain Island Lake Marine Commission is comprised of seven citizens appointed from Gaston, Lincoln and Mecklenburg Counties. Our mission is to help protect and preserve the unique resource that is Mountain Island Lake, which provides drinking water for more than 750,000 people, habitat for a diverse population of mammals, birds, fish and other wildlife, and recreation for thousands of people year-round.