Closing on a piece of land CLC vows to protect in perpetuity is just the beginning.

Stewardship resembles a marriage. Except marriage is only “’til death do us part.” Stewardship is forever.

It takes a lot of work and sometimes multiple years to get to the closing on a property Catawba Lands Conservancy (CLC) is vowing to protect. But that’s just the beginning of a relationship that will outlive anyone involved in the transaction.

CLC’s Land Stewardship Director Sharon Wilson said there are three major components to stewardship. The first is related to compliance. (This is where good communication comes in – just as it does in marriage.) The Land Trust Alliance, of which CLC is a member, provides stewardship guidelines CLC adheres to.

“When you hold a conservation easement, the goal of stewardship is to make sure that the terms of the easement are carried out,” reads the Land Trust Alliance website. “Of course, it’s far better to avoid a violation than to have to resolve one, which makes maintaining positive relationships and clear communication with landowners a core stewardship activity.”

“Some landowners are, by necessity, absentee,” Sharon said. “We’re their eyes and ears on the ground.” It helps that Sharon is a meticulous note keeper … and that she’s been with CLC for 14 years. To monitor the nearly 200 properties CLC oversees, Sharon photographs and documents each one and notices even subtle changes from year to year.

It may be hard to imagine just how many issues Sharon and the stewardship team – affectionately known as “The Stew Crew” – confront. GIS Director and Biologist Sean Bloom, Land Stewardship Associate Amy Schmidt and Sharon visit, photograph and document land CLC owns and privately owned land on which CLC monitors a conservation easement. On larger properties, the whole team – plus staff and volunteers – may be involved.

Firewood cutting and illegal deer stands are typical trespass violations “The Stew Crew” finds. But some violations shock even a veteran like Sharon. Recently, she discovered someone had created a driveway through a protected property to a nearby fishing hole. It’s typically not the landowners in violation; it’s often a neighbor. So, a lot of detective work goes into identifying the culprit. And that’s before the team can even think about working on a resolution.

The second component of stewardship is maintenance. (Any marriage requires a certain amount of housekeeping.) “We own a lot of land – nearly 5,000 acres of the 15,000 acres we protect,” Sharon said.

“In those cases, we act almost like a small Parks and Recreation department,” she continued. Since part of CLC’s mission is connecting humans to nature, eight of CLC’s properties are open to the public via segments of the Carolina Thread Trail. That means CLC is responsible for maintaining 17 miles of trail and three kayak launches.

“There’s always trash to be picked up and invasive species to be removed, Sharon said. “Our staff of three plus lots of support from volunteers handles all of that. And when it comes to trash pickup, we couldn’t do it without a strong corps of volunteers.”

Not only does “The Stew Crew” need to look out for the land CLC owns and manages, but they also need to be aware of what’s happening on adjacent properties. Land changes over time, and those changes – some natural and others man-made – can have a major impact.

Man-made changes include erosion from nearby construction that impacted McAlpine Creek on a CLC preserve. Natural enemies include the emerald ash borer, an invasive beetle, which has made its way onto CLC-protected lands in Lincoln and Gaston counties and is killing all the native ash trees. “The Stew Crew” is treating some of the infected trees and removing the dead ones that pose a safety risk. 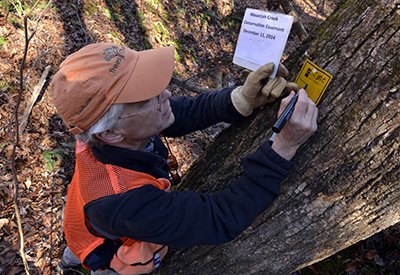 THE BEST PART OF THE JOB

The third bucket is what Sharon refers to “as the cool stuff.” This is the sweeping romantic part of stewardship – connecting people to nature, restoring or improving habitats, protecting rare or endangered species and seeing the fruits of all that labor.

And for that, sometimes, the team has to look really closely. One piece of property CLC protects is home to North America’s smallest turtle. In fact, that tiny turtle is the reason the land was conserved in the first place. The bog turtle is a “federally listed species” – that’s a level just below threatened or endangered. The adult bog turtle is no more than 4 or 5 inches long, and it likes hiding in mud, which makes it difficult to find and monitor them. Davidson College students and CLC staff stop by often to look for signs of their tiny wards.

When the bog these turtles call home started to get a channel in the center of it, Sharon and her team went to work to determine how to repair the channel and keep it from draining the bog. They enlisted the help of the U.S. Fish and Wildlife Service, the N.C. Wildlife Resources Commission, Davidson College and engineers and contractors. A “partners grant” from the U.S. Fish and Wildlife Service funded the habitat restoration.

The restoration was a two-day endeavor that involved tedious detective work – searching for turtles the size of a quarter – and then temporarily relocating them before bringing in the heavy equipment needed to fix the channel.

The work wouldn’t be possible, Sharon said, without the help of dedicated partners: “who all played a huge part in improving the habitat for these bog turtles.”