THE RIVER AND US: Six friends explore the Rocky and Pee Dee Blueways

Story and photos by Nancy Pierce

I’m drawn back time and again to rivers because of this: they change with seasons and storms yet stay dependable in their core disposition.

So, it seemed apt for me to explore the Carolina Thread Trail’s Rocky River and Pee Dee River Blueways with women I’ve known since our adult children were tiny: Nan Byars, June Lambla, Laurie Reed. Allyson Sipple and Jennifer Twiggs. 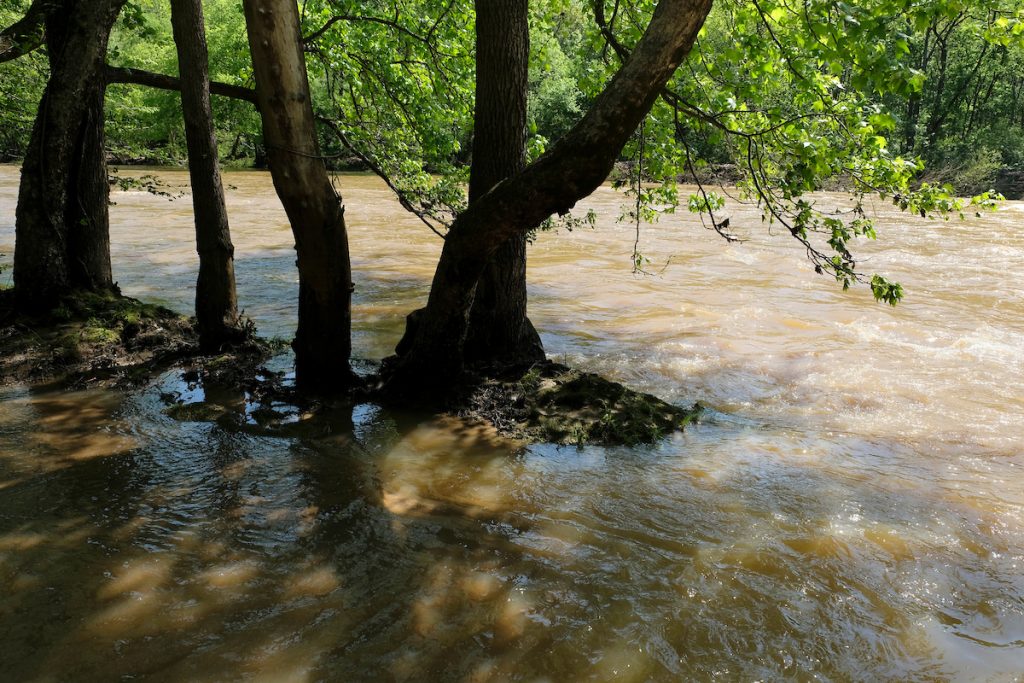 We paddled 25 miles in 12 hours between Oakboro, NC and the Pee Dee National Wildlife Refuge (PDNWR). It was an easy 2-day trip.

Most of Mecklenburg County is in the Catawba River basin. But the Rocky River rises from backyard trickles south of Mooresville and dumps into the Pee Dee River 44 miles as the crow flies southeast of downtown Charlotte. Yanked into a straight line, the Rocky would be 95 miles long.

Four days ahead of our weekend trip, torrential rains fell on the 1,372 square mile Rocky River basin. We six women, median age 63, are a hardy bunch but we’re flatwater paddlers and not particularly interested in anything above class 1 rapids.

Whatever their adventure quotient, paddlers should check a river’s level and flow at waterdata.usgs.gov. The Rocky’s gauge at Hwy 52 near Norwood is a reliable indicator of what to expect on the rest of the river. Its five-year average depth is 3.5 feet with a 750 cubic feet per second (cfs) flow, On Wednesday the Rocky River was 13.5 feet deep and 17,000 cfs. Yes, 17 thousand.

The Rocky is 100 percent wild. No dams or lakes modify its flow. And its banks are steep, so high water swooshes through the channel instead of spreading over a wide floodplain. As the water rises, its flow increases exponentially. 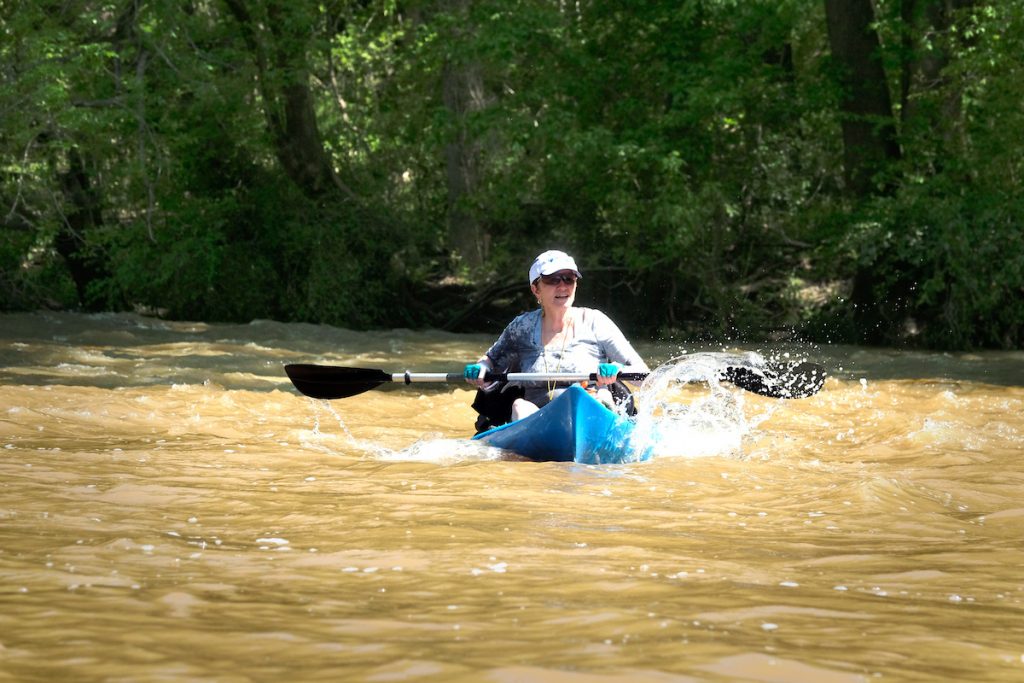 More rain on Thursday gave us pause but by Friday noon, with no rain on the radar, I called our trip a go. Saturday at 8 am we met JW Weller and Deb Musika from Oakboro-based kayak rental and shuttle service River Roosters at our trip’s endpoint, PDNWR. We had arranged to leave two cars there overnight.

When we launched at Oakboro Blueway Park II, the river was running 3.5 feet and 12,000 cfs — the upper limit of where JW is comfortable sending flatwater paddlers down the river. But we had our own well-used sit-on-top kayaks and we assured him that we knew how to choose our chutes and detect rocks just below the surface.

The 10 miles below Oakboro 2 are the most technical on the river. Right off the landing we ran a series of easy rapids, quickly going from dry to drenched. It felt good in the warm air.

The evidence of recent high water was stunning: waterlogged, twisted tree parts dangled from branches 15 feet above us. It blew our minds to think that this same river had deposited the debris there just a few days earlier.

A couple miles down, Nan paddled left into a narrow fork separated from the main channel by a wooded island. We followed, dragging our boats over rocks through shallow water and navigating downed trees just short of being logjams.

Staying behind to take photos, I let a deep whirlpool twirl my boat and I glided backward but in control to a gravel bar just before the main channel, where the others had stopped. 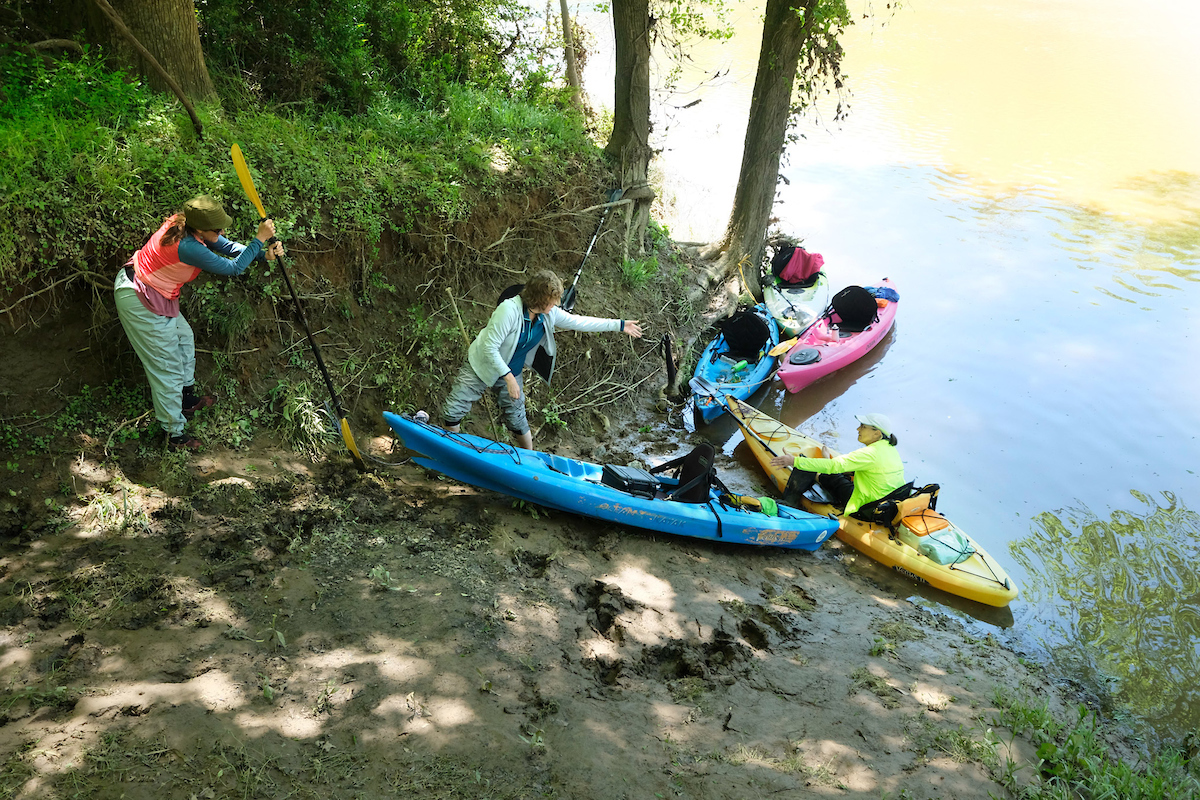 That was the last time all weekend we got out of our boats easily. The steep clay banks were still saturated from the high water, so forays onto the river edge meant slipping and sinking calf-high into the muck.

We spotted a grassy area atop a bank for lunch. While still seated, we tied our boats to edge-roots then eased our way out of our floating kayaks onto the slick bank. Laurie scrambled up first, kicking holes in the mud then rolling rocks down to me. I stomped the rocks into the holes to create makeshift steps, more in anticipation of having to get back down the bank than to help the others climb up. We pulled each other up hand over hand with our paddles, at times sliding back down, giddy with collaborative effort and laughter. 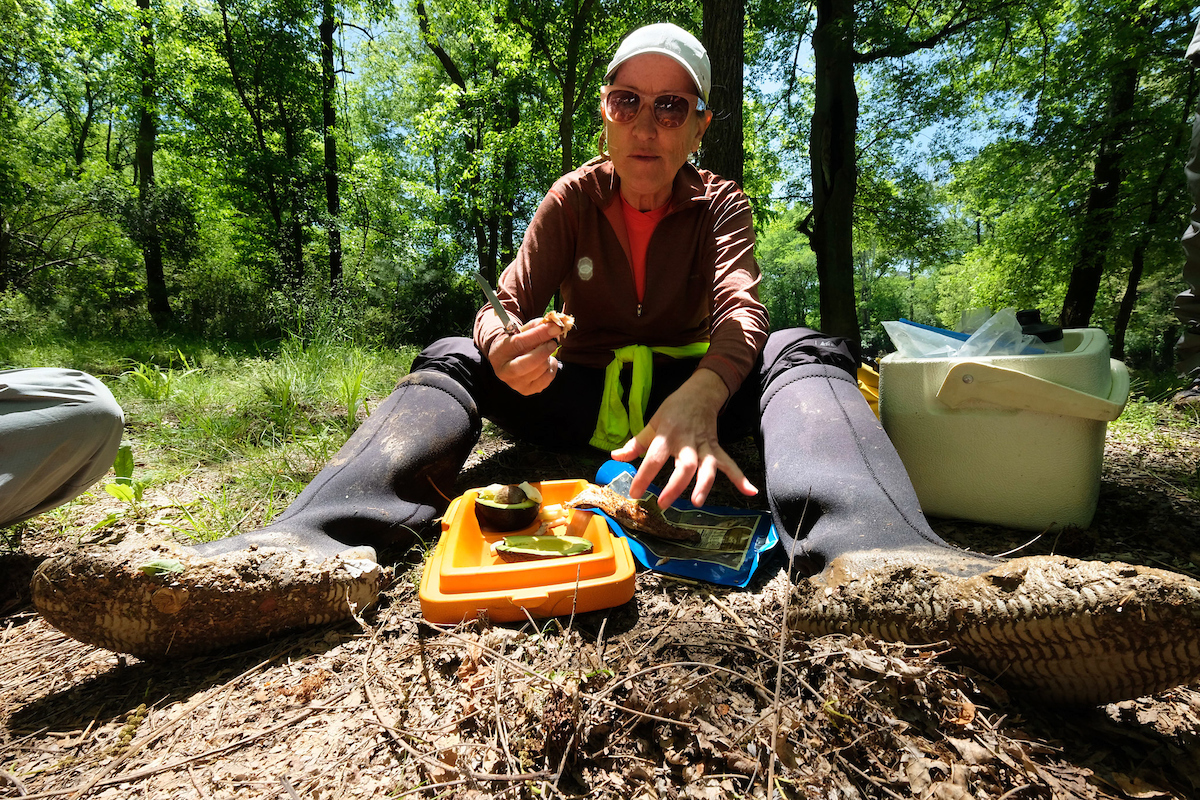 We heard but didn’t see small creatures tumbling into the water as we paddled by. We pondered: Are we the only humans they’ll ever see before being eaten by another creature up the food chain?  The water in two of the creeks was thick and brown as cocoa. The third was more like weak tea through which we could see the stony creek bottom, two feet down. Again, we pondered: Why the difference?

A tributary is like sugar to me: easier to bypass completely than to taste and quit. I longed to drag my boat over the logjams and continue following the creeks upstream.

Instead, I followed them virtually on Google Earth a few days later and was rewarded with discovering this link in my world:

Far away from the Rocky River due south of Monroe near the state line, Sandy Ridge Road rises to 745 feet above sea level. That’s high for Union County. When I summit that plateau cycling, the view takes my flatlander’s breath away each time. What I never knew is that Lanes and Richardson Creeks rise on opposite sides of that plateau, a mile apart. The two creeks wander about 70 miles each if you count the meanders, then converge at the bottom corners of an oxbow bend in the Rocky River below Aquadale, where we explored them both by kayak. 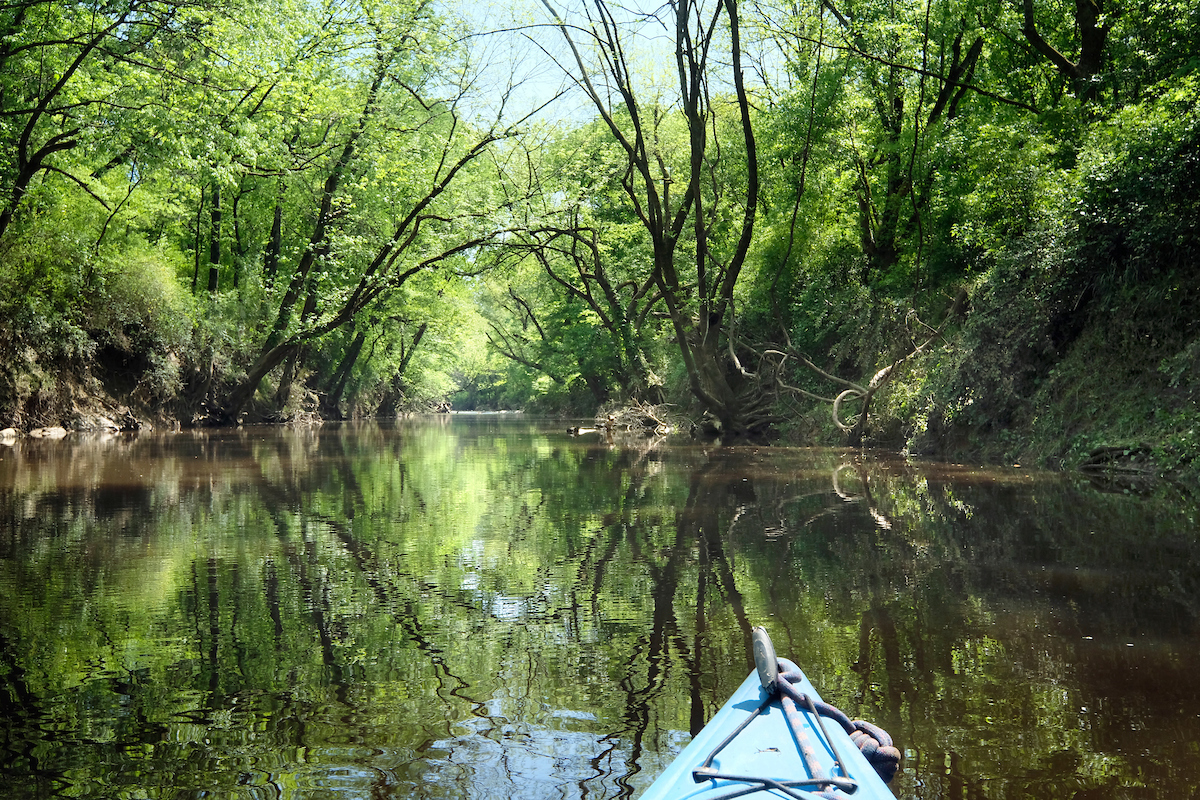 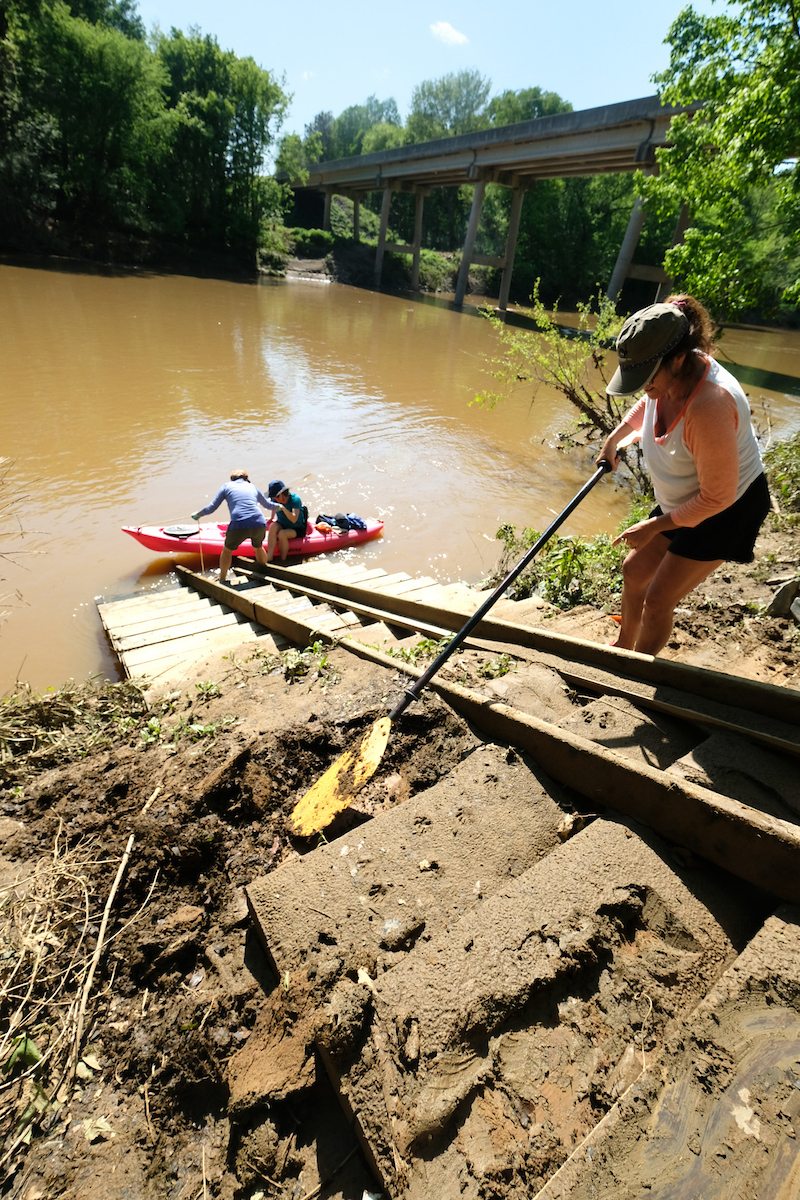 While June and I savored what we now know is Richardson Creek, the others tucked in behind a downed tree across the river to wait for us. Paddling out of the creek, we spotted Nan and Laurie waist-high in swift water, wrestling with gyrating kayaks and their attached but floating cargo.  Allyson was chasing runaway paddles downstream. We often purposely tip our kayaks to swim a bit, but a half-submerged tree and current can be a hazardous combination. I’m sure they had a few moments of concern, but by the time we joined them they were having fun with the incident. 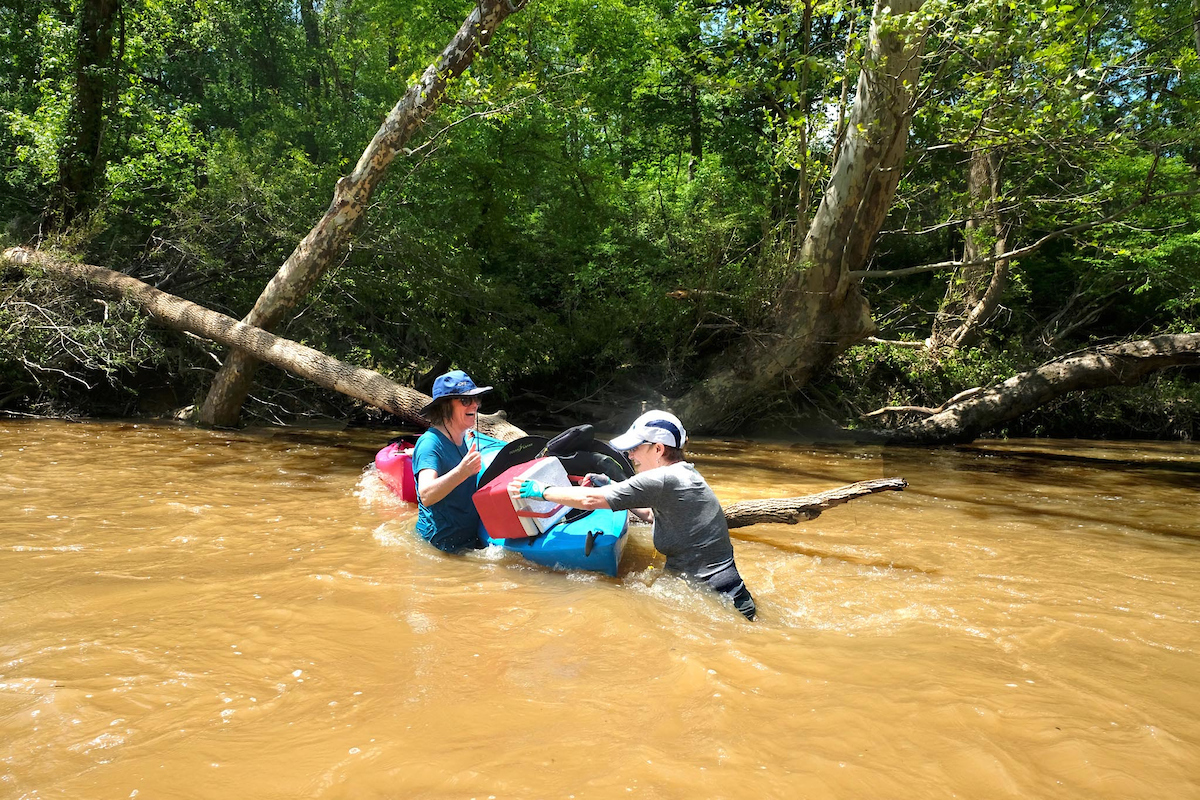 We arrived at Plank Road landing around 4 PM. Jennifer used her paddle to shovel mud off the steps, then we pulled our kayaks up the ramp and lock-chained them together. We lashed our paddles to the top of my Prius (which I had left there earlier), piled inside and arrived wet and muddy at 3 Eagles Sanctuary, the home of our friends Ron and Nancy Bryant. They had invited us for dinner and to stay the night. 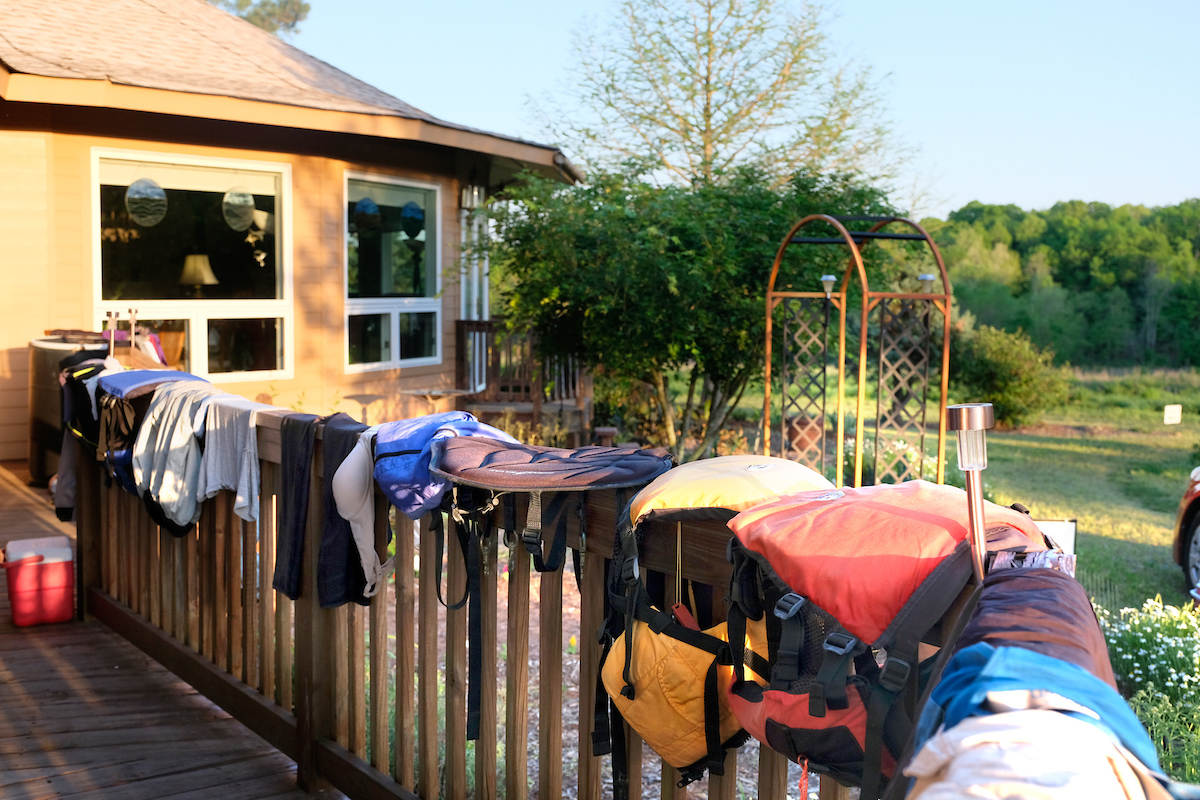 The Bryants are well-known for helping jump-start environmental activism in Charlotte during the 1990s. Nancy founded Clean Air Carolina and Ron was a founding leader of both the Catawba Riverkeeper and the Catawba Lands Conservancy. For the past ten years, they’ve exercised their faith-based passion for stewardship of the Earth from their 170-acre farm and forest on the Pee Dee River. Early this year, they leveraged their own resources to help the state add 45 acres to Morrow Mountain State Park.

We showered in solar-heated water, dried our clothes outside in the breeze, then took drinks and appetizers on golf cart tours of the land and riverfront. Then we feasted on vegetables, greens and pork chops, fresh from Nancy and Ron’s garden or from Lazy Heron Farm, a sustainable, community-supported agriculture venture they host on 3 Eagles Sanctuary.

Taking the Bryant’s passion for the Earth with us the next morning on the river, we pondered: How can climate change not be a moral issue? We grappled with some human values that justify exploitation of the Earth and harm to its most vulnerable people.

Sunday was a heaven-on-earth kind of day, chilly at dawn then hot. The water was calm. For a while we worked hard against a stiff headwind, then the river curved and we had a side wind, then a tail. Unlike the day before, we noticed birds: lots of kingfishers and blue herons, a couple eagles, osprey, a green heron. 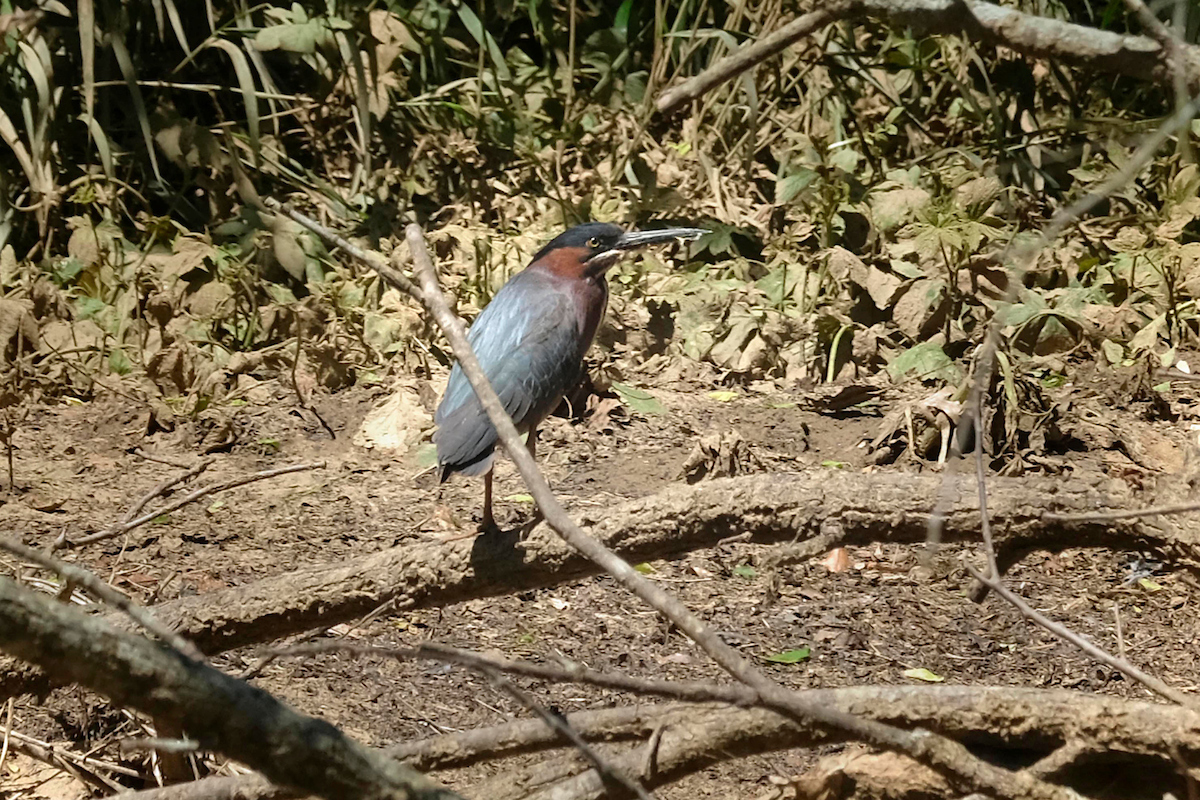 To me, few sights are more spectacular than a Sycamore tree growing horizontal over the water, its white bark stark against the Carolina blue sky. In the rush of high water, other trees topple into the river and die. But the Sycamore’s broad root system holds it up, stabilizing the river banks. It seems like there’s a Sycamore tree at every bend in the Rocky River.

Days later, I tried to match satellite images of the River to my photos. I had little luck; channels and gravel bars morph with every storm. But from high up in the atmosphere the Sycamores appear in stark contrast to the dark river water, and I easily matched their trunk patterns to photos I had taken from below.

We saw or heard few signs of civilization either day: a couple houses, three roads and one rail bridge with a huge pile of plastic and foam detritus at its base. Discarded tires blended into the landscape.

When we heard the pop-pop of sporting clay guns we knew we were passing The Fork Farm and Stables, a CLC protected property at the confluence of the Rocky and the Pee Dee Rivers. 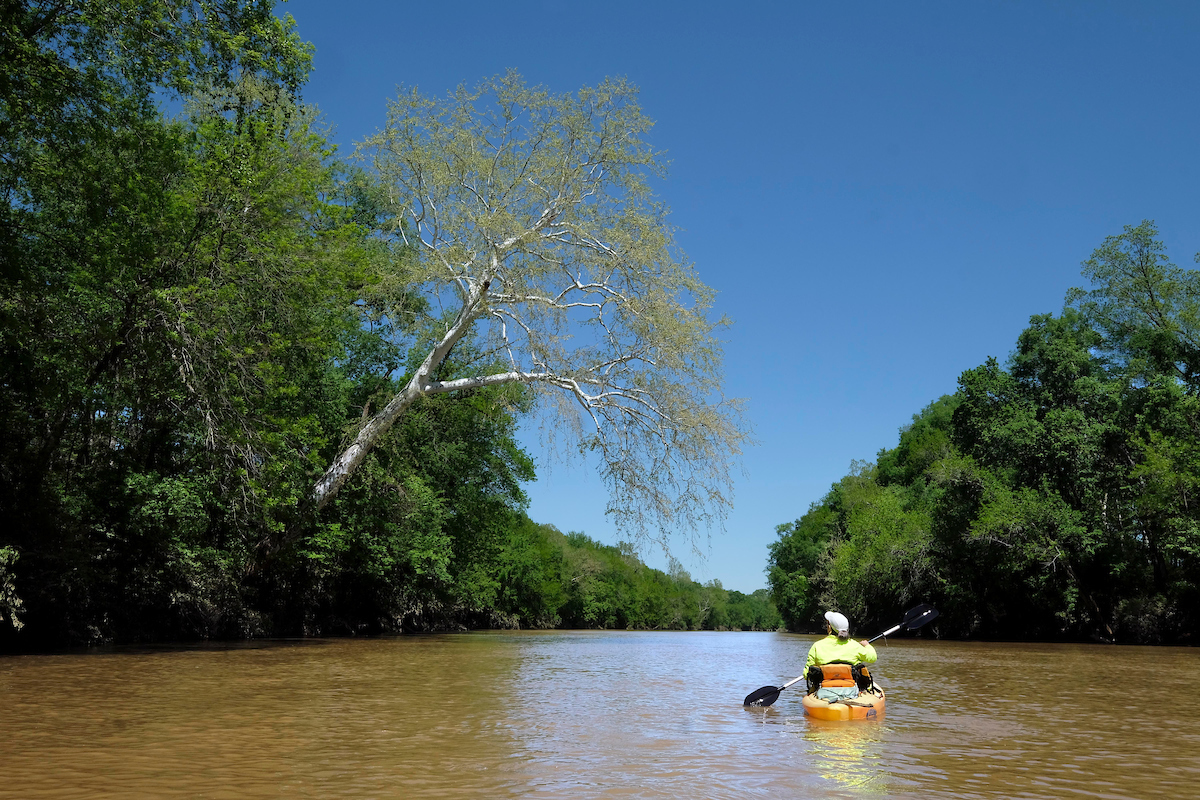 Ten days earlier I had paddled this section with Bill Stokes and Christy Queen. While exploring a sandbar just upriver from the confluence, we rescued a yard-long water snake whose soft underbelly was caught on a thorny vine. Bill set it on the bow of his kayak where it curled like a reptilian hood ornament as we paddled downstream.  Just short of the confluence, the snake turned, nodded its head and – we all swear – smiled as if thanking us for saving it from being an easy osprey treat. Then it glided sideways into the water.

I told this story to my companions, intending to pause on the same sandbar and plan our approach to the PDNWR landing. Getting there can be dicey when Duke Energy is releasing from the Tillery Dam upstream, as it was that day. A set of rapids just below the landing means that if anyone misses it during a fast flow, they may have to paddle 3.5 miles downstream to the next landing. The protocol is this: a couple kayaks maneuver into a calm spot above the platform while the others backpaddle upstream and wait their turn. 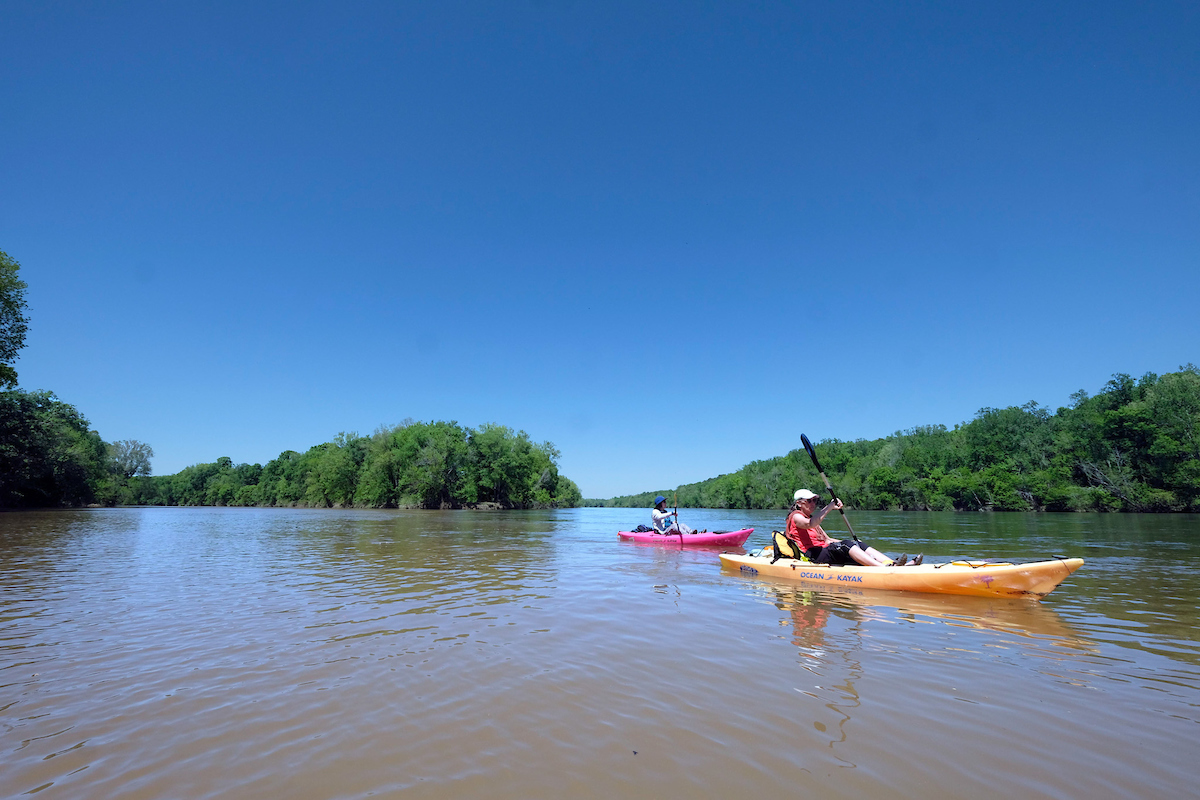 The sandbar was gone, and the landmarks I remembered from the prior trip had disappeared. Sure, I could have dropped a pin the day before. But paddling way out in front of my group, scanning the bank like an old-time explorer looking for land and in charge of safely landing my friends, I was glad my phone was off and at the very bottom of my drybag. And we all landed without incident.

In the days following our trip, JW sent me videos of clear Rocky River water gently rippling over rocks and hard, sandy river edges. He was concerned that we hadn’t seen the river at its best. No worries, JW. In a bucket-list driven world, I consider myself lucky to crave this: a firmly rooted Sycamore, mysterious tributaries, silence, old friends and the river – all captivating and lovely at every stage.