On the Bird Watch at Buffalo Creek

Bog turtles were first observed at the Gaston County preserve in 1991. With grant funding from Williams-Transco, researchers and students of the Davidson College Herpetology Laboratory (DCHL) have been studying the turtle population since 2006. CLC’s bog turtle population is one of only a few in the North Carolina Piedmont.

Surveys for bog turtles have been conducted regularly at this site and the numbers of turtles have declined substantially since the mid 1990s.  In fact, since 2007, only a few turtles – between the ages of 20-35  – have been observed. However, in early June during a 24-day period of intensive searching, my team and I found 10 turtles. Two of them are juveniles: a  one-year-old and a  three-year-old. Seeing evidence of successful reproduction is certainly exciting and noteworthy news. 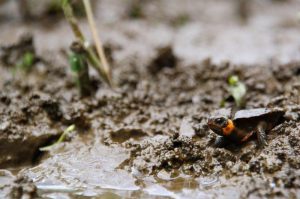 Bog turtles are dependent on relatively rare and specialized wetland habitats such as bogs and fens.  This, in conjunction with their small size and preference for wallowing in the mud, makes them really difficult to find. The turtles are individually marked, so we know each one’s history. With help from our dedicated DCHL volunteer James Green and students from Dr. Michael Dorcas’ Herpetology Laboratory class, we spent many hours searching over the past several weeks for the turtles. “It’s like searching for a needle in a haystack, but we’ll keep looking throughout the summer,” said Michael. “We know this group has successfully reproduced twice in the past three years, which is incredibly exciting!”

Searching for these turtles involves two different methods: trapping and probing.  Small, harmless traps with shade covers are placed in likely travel corridors, and checked daily.  We also use large sticks to probe the mud and vegetative clumps. Both methods are effective, and sometimes certain turtles are only found in traps while others are only found by probing the mud. Bog turtles are legally protected or regulated in all states were they are found. But in North Carolina, these regulations do not provide protection of their habitat. That’s why finding these turtles successfully reproducing on CLC’s permanently conserved property is so important. (For safety and protection of this rare and threatened wildlife species, CLC is withholding the name of the preserve).