The North Carolina Forest Service (NCFS) and Catawba Lands Conservancy worked together to conduct a prescribed burn Monday at Buffalo Creek Preserve in Mount Pleasant, NC, in northern Cabarrus County near the intersection of Malibu and Mt. Pleasant roads. 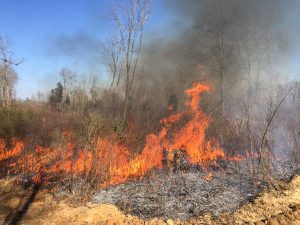 The Preserve and Carolina Thread Trail have re-opened to the public.

Buffalo Creek Preserve is a 392-acre permanently protected area owned by CLC. The burn occurred on a 62-acre portion of the preserve. The fire lasted for a few hours with monitoring and patrol occurring for several hours to hinder fire reoccurrence. Measures are also in place for smoke control and monitoring.

The fire is part of a habitat restoration to re-establish a Piedmont oak savanna, an open natural area that is conducive for the growth of native warm-season grasses and wildflowers.  Prior to taking ownership of the property in 2011, CLC staff observed native warm-season grasses in an area where trees had been harvested in 2008. Working with biologists from the North Carolina Wildlife Resources Commission (WRC), US Fish and Wildlife Service (USFWS), and the Natural Resource Conservation Service (NRCS), CLC further identified this area as one that would provide an opportunity to establish an important wildlife habitat. A prescribed fire was conducted at Buffalo Creek Preserve in September 2012. 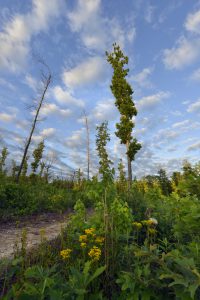 Historical documents dating back to the 1540s show that prairie-like ecosystems were common in the region surrounding present-day Charlotte.  But over time, farming, fire suppression and development destroyed most of the historical Piedmont savannas. Today, a few scattered remnants endure – largely along roadsides and utility lines and on protected land – where they preserve rare native plants and offer a glimpse of our region’s past.

Within the next four months, an array of native grasses will grow within the burned area – providing an ideal habitat for grasshopper sparrows and populations of wild turkey quail and other birds. The prescribed burn will also help remove fuels from the soil and reduce the potential for wildfires.

Fire is a natural part of both the forest and grassland ecology. According to John Isenhour, a technical assistance biologist with the WRC, this prescribed burn is important because it will suppress woody regeneration and restore populations of native plants and grasses important to North Carolina’s wildlife.

“Savanna habitats are vital to many species of wildlife and are among the most rapidly declining ecosystems in the state,” said Isenhour.

Several rangers that are certified burners will be at the preserve to conduct the burn and ensure the safety of surrounding properties and natural areas. The rangers will be operating from a burning plan that is designed to accomplish the objectives of the burn and manage the fire conditions and smoke. CLC previously sent letters to residents living near the burn site to explain the burn process and address questions.

In December of 2011, the Buffalo Creek Preserve was donated to CLC. In addition to the 70-acre oak savanna, the property protects at least 120-acres of active farmland and hayfields.