Found in the Field: Witch Hazel

5 Wins for Conservation and Trails in 2017

Rare Flowers of the Piedmont Savanna

Along roadsides and utility lines survive the relics of a largely forgotten habitat – the Piedmont savanna and prairie. Historical documents dating back to the 1540s show that prairie-like expanses of grasses and wildflowers freckled with a few trees were common in the region 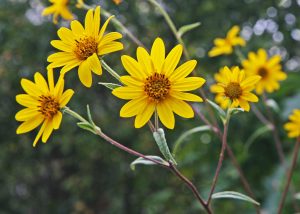 surrounding present-day Charlotte. Plants that required natural disturbances, such as fire and animal grazing, thrived in these dry, open areas. But over time, farming, fire suppression and development destroyed most of the historical Piedmont savannas. Today, a few scattered remnants endure, preserving rare native species and offering a glimpse of our region’s past.

Named for the local clergyman and botanist who discovered the species, this federally endangered wildflower blooms in early October. Unique to the Piedmont of North and South Carolina, it once flourished in the prairie landscape, but today, there are only about 70 known populations. Most of these are scattered within 100 miles of Charlotte, including on two properties protected by CLC. (right top photo) 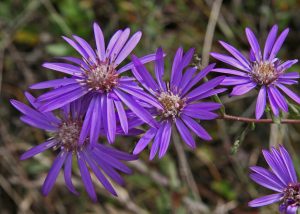 Its dark purple florets, which bloom between October and November, stand out along the open woodlands and roadsides where they are typically found. Like the Schweinitz’s sunflower, this rare perennial herb (designated a species of concern) thrives in areas of natural disturbance. There are only about 100 surviving populations of Georgia aster in the United States, and five of those are in Mecklenburg County. (feature image and right bottom photo)